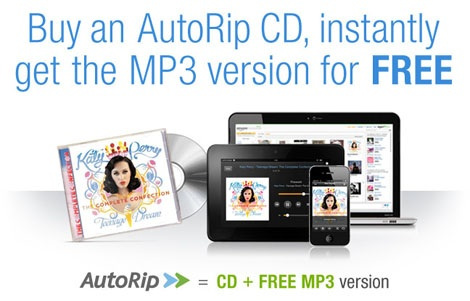 It seems that Amazon has decided to go back to the basics by reviving its digital music business stepping up competition in CDs.

Amazon, about two years back launched its Cloud Player, enabling users to have a backup of their music files, and stream it on any device of their choice. This was followed by Apple and Google.

Now, it has come up with an ‘extension’ of its Cloud Player by introducing AutoRip, a service allowing you to rip everything customers have bought on CDs into the Cloud Player? library.

Steve Boom, The VP of Digital Music at Amazon said, “What we’re doing with AutoRip is bringing the cloud to physical music, eliminating that distinction.”

Although the idea may not be entirely original as we have seen devices like this in the past, but such initiatives face stern opposition ? if not litigation from the side of music companies. One such example is of MP3.com which introduced a feature letting users to gain access to their online music after inserting a CD into the computer, to verify ownership. But the site was sued, and eventually shut. Same is the case with AnywhereCD by Micheal Robertson in 2005; ran into problems with music labels.

However, it seems Amazon has tackled this problem   ? signed deals with major record companies before introducing this new feature.

The Intl Consumer Electronics show held in Las Vegas each year gives a platform for electronics manufacturers to introduce their latest gadgets and new inventions, i.e. a fork that measures the pace with which you are eating, or a tablet PC acting as a coffee-table surface.

This convention is a forum for digital music service providers to not only introduce their new ideas, but also get updates on what’s new in the industry. Some of this week’s announcements in this regard are:

Muve music is a subscription service for wireless phones which attracted almost 1.1 million subscribers’ last year. Experts believe that Muve is not in the running for the hottest tech products in the market as it only caters to low-income customers. However, with subscriptions matching those of Spotify and Rhapsody, analysts may have to review about Muve Music’s potential.

Internet radio providers are targeting automobile companies and desire to have their setup installed in cars. One company, Pandora, is already pre-installed in 85 car models including the latest one by Chrysler. The service is integrated for TVs, cars and mobile phones among others.

Sirius has announced of having increased its subscribers: from 2 million last year; the number has now reached 23.9 million. It also expects to further increase its user base by 1.4 million in 2013.

Christened as the ‘online bible for alternative music’, Pitchfork Advance is a service allowing streaming of new albums, in advance. The company expects its new feature to compete with NPR music’s services.