A spring party taking place last month in a beach town of Southern California ended up in a riot where the guests started smashing cars, breaking windows, hurling rocks and whatnot. Loads of people were injured while a few landed in the hospital, which included a few police officials as well.

At present, the authorities are pursuing the matter through investigation in Isla Vista and are making use of a recently-launched a web and mobile app that could help in exactly these types of scenarios.

Los Angeles Sheriff’s Cmdr. Scott Edson, who played an important role in conceptualizing the entire matter after the occurrence of Boston Marathon Bombings says, “When the public really wants to catch these bad guys as badly as we do, this is the mechanism. They can help us by sending pictures and video.”

This recent development, known as the LEEDIR i.e. the Large Emergency Event Digital Information Repository, allows police to collect evidence through smartphones by combining an app with cloud storage.

Advocates of the crowdsourcing argue that it provides a safe, secure and a single storage system for numerous electronic tips that are often received during a crisis situation. Another advantage is that system crashes and high costs owing to data overflow would not be a problem since the police can access remote database servers that are available online. As Edson says, most of the agencies “don’t have lots of bandwidth lying around.”

On the other hands, advocates of privacy argue that such an app brings innocent and unsuspecting people under the watchful eye of the police, while at the same time fail to produce much useful evidence. Nate Cardozo, a civil liberties attorney working at the Electronic Frontier Foundation says, “There’s a reason that we pay professionals to work in police departments.” He further added, “And there’s a reason we don’t crowdsource photo lineups and the like — crowds aren’t good at it.”

Edson states that he observed the events after the Boston attacks took place the previous year, the authorities were literally flooded with photos and videos of people at the actual blasts’ scene. At that time, he came up with the idea that a new tool could enable seamless evidence gathering by streamlining the entire procedure. “It seemed like the perfect opportunity to go to the private sector,” he said.

For designing the system, Edson collaborated with a California-based tech startup company CitizenGlobal Inc., Culver City, and Amazon Web Services in a public-private partnership, and offered it free of cost to public members and authorities. 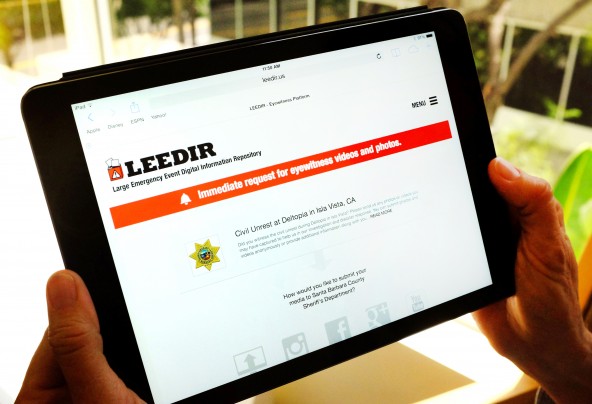 At the system announcement in November, George D. Crowley Jr., co-CEO of CitizenGlobal said, “With tens of millions of smartphones in use in the U.S., it’s a virtual certainty that citizens will be taking videos and photos at any terrorist attack, large-scale emergency or natural disaster.” He further added, “real-time access to such content has, too often, been a matter of luck or chance”, and that this system would lead to an improvement in this process.

Following the Deltopia violence, this technology was first sampled by the Santa Barbara County Sheriff’s Office, and the results were somewhat mixed. According to spokeswoman Kelly Hoover, even though the system is easy to navigate, they have only received a few submissions because it is so recent.

Throughout the nation, police agencies have shown an interest in the technology, and it is predicted that its usage will grow with time. The company, by employing Amazon Web Services at its backend and LEEDIR at the frontend, makes crowdsourcing platforms aimed at police, cities and schools etc.

Various police departments in Philadelphia and Sacramento, California advise the usage of security cameras for official purposes by registering for them. Apart from that, authorities in Houston and Los Angeles are using the footage of traffic cameras for several investigations. In Atlanta, on the other hand, Marietta police are using a tailor-made version of the app to catch drivers involved in hit-and-run cases along with articulating a desire to broaden their system and include pothole reports as well, according to CitizenGlobal co-CEO Nick Namikas.

Dan Simon, a law professor at the University of Southern California feels that technological advancements like these could facilitate crime reporting. He says, “It’s an easier psychological process to upload video taken by cameras rather than filing complaints by going down to the police station.”

LEEDIR can be accessed by any police agency, after which it can ask for witness uploads by alerting the public. This system is available for large-scale emergencies, large areas as well as a number of jurisdictions.

Responses from people are received when they go online or download the app onto their smartphone, and then send images or video clips to an “electronic bucket”, as described by CitizenGlobal officials. The police can later go through the evidence received anonymously, and users are advised to remove metadata from any file that they have sent.

Though there is a possibility that the evidence received through this app could be misleading or modified, authorities say that all the tips received by them would be investigated and then used to verify other information that comes across during an investigation.

Cardozo, the civil liberties attorney, says that there are still “massive privacy implications” in terms of submitting photos or videos online that could associate innocent American citizens with criminal doings. According to him, the Boston Marathon attacks revealed the weakness of crowdsourcing, and the situation was deemed as a “modern-day witch hunt” when social media users focused on the wrong individual. He further added that the authorities would raise the content profile when asking for submissions from the public, “and for the people on these videos, they might not expect or want their image to be forever associated with a terrorist attack or a bank robbery or a riot in Isla Vista.”