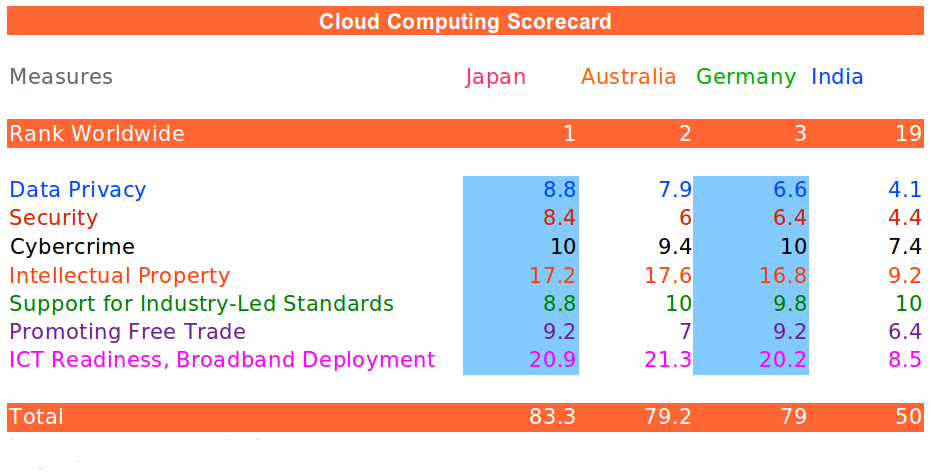 The Business Software Alliance (BSA) has published a list of cloud readiness top-ranked countries in its annual ‘Global Cloud Scorecard’ report. According to the report, Japan, Australia, U.S., Germany and Singapore are top 5 countries in descending order, while rising markets of South Africa, Indonesia, Brazil, Thailand and Vietnam appear at the bottom.

BSA is an alliance of various software dealers ranging from Microsoft, Oracle to IBM and Apple, and is famous for warning small enterprises from using pirated versions of software. The organization just publicized its next Global Cloud Scorecard that ranks the top cloud-friendly countries based on their lawmaking and regulatory policies.

The criterion which the BSA followed for ranking is interesting in a way that it considers metrics not directly linked to cloud computing. For instance, for intellectual property rights, the company states: “Providers of cloud computing and digital economy technologies and services, as with other highly innovative products, rely on a combination of patents, copyrights, trade secrets, and other forms of intellectual property protection. Thus, to encourage investments in cloud research and development, as well as infrastructure, IP laws must provide strong incentives for these investments and clear protection and vigorous enforcement against misappropriation and infringement.”

The BSA considered the following points while computing the “cloud readiness” countries ranking:

These six major points which BSA considered while ranking “cloud readiness” countries of the world, hold views from rational to arguable, and show the cloud expectations of big technology giants.