Following massive price-cuts by Amazon and Google, Microsoft has also joined the race by reducing prices of its different cloud computing services, as revealed in a blog post of Steven Martin, the general manager of Windows Azure, just days before the company’s Build Conference in San Francisco. The latest pricing structure will take effect from today, April 3, 2014.

The software giant’s cloud customers will now have to pay 27 to 65 percent less. Martin wrote in his blog that the Redmond-based company totally understands the importance of maintaining reasonable prices without compromising on the quality of services.

Heavy pricing has been one of the major hurdles in adopting cloud computing. However, an intense competition between major cloud service providers has been witnessed in recent months, which brings about an evident decrease in charges.

Google took the initiative and dropped 32 to 85 percent price of its Google Cloud Platform, followed by Amazon – arguably the biggest cloud service provider in the world- which is offering 36 to 65 percent cuts, and now Microsoft is trying to retain its existing customers through lowering its prices.

The smallest reduction of price, 27 percent, has been given on Microsoft’s general purpose virtual machine called ‘basic’; whereas, the company has offered biggest savings, 65 percent, on Azure’s Block Blob service. 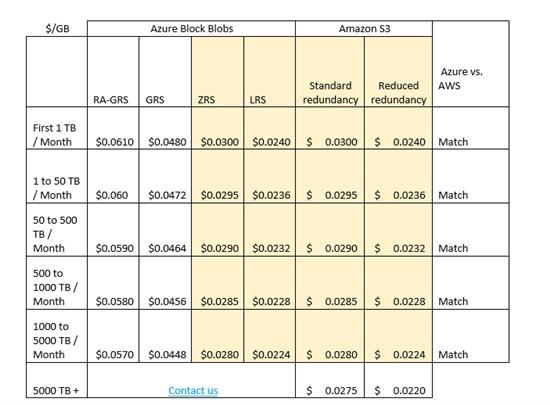 While many cloud service providers are decreasing their prices to attract maximum customers, IBM’s SoftLayer, which it acquired last year for a mammoth $2 billion, is not prepared to do that, as it believes cheaper services will come with weaker quality.

In a recent interview, Lance Crosby, the Chief Executive Officer (CEO) of SoftLayer expressed his satisfaction over IBM’s current standing in the cloud market, and made it clear that the company will not drop down the fees only to compete against rivals like Amazon, Google and Microsoft.

While Amazon is regarded as the leading cloud service provider when it comes to the number of customers and the overall capacity, IBM claims to have generated $4.4 billion revenue from the cloud last year, which makes it the biggest cloud player.

However, it remains to be seen whether IBM remains consistent about its prices in the coming months or not. I believe, it will be forced to offer cheaper services; otherwise, the likes of Amazon, Google and Microsoft might just run away with the show.

Ben Uretsky, the CEO of DigitalOcean, which is considered as a competitor of Amazon being an upstart cloud-based web hosting company, has grabbed this opportunity to slam the cloud market leader; he said, if Amazon can cut down it prices to about 40 percent, it clearly means they have been charging extra money for many years. He expects Amazon to further lower the service charges in future; otherwise, it will fail to maintain its presence in this extremely competitive cloud market.

I have regularly kept you informed about the changes in pricing policies of major cloud players and will continue to update you guys about future developments.