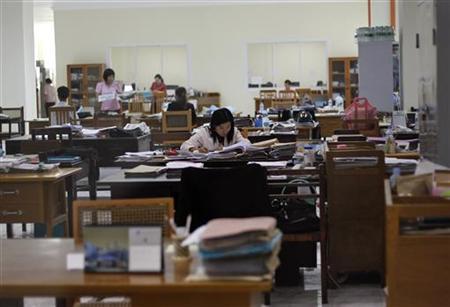 After spending decades on managing tons of work at Central Bank of Myanmar longhand, trio of Japanese companies are moving this giant to technological competence. The three companies, Daiwa Institute of Research Ltd, Fujitsu Limited and KDDI Corp.  team up to give South Asia its first cloud system. Of course, it is an effort to keep up the pace with Myanmar’s changing demands.

Myanmar is bringing a lot of changes from past one and half year, to empower country’s economy, as decades of military rule has left it lifeless and exhausted. The biggest challenge is to update Myanmar’s old and irrelevant systems. The list is huge, from its electricity issues to sewage system, everything needs bolstering, and same is the case with financial institutions.

The central bank’s way of doing everything, even most complex problems, by hand was a real pain. But, it has decided to change itself.

Takashi Fukai, President of Daiwa Institute of Research, said in a statement, “this new computing environment paves the way to build an ICT (information and communication technology) infrastructure that is indispensable for the modernization of Myanmar’s financial system and represents an important milestone toward the establishment of a stock exchange.”

The Tokyo Exchange and Daiwa Securities Group have also signed an agreement with Myanmar in May to assist in establishing a security exchange.

Considering it as Asia’s last frontier, Japanese firms have rushed into Myanmar, forcing it to adopt all technological expertise in order to face growing numbers of international opponents. Japanese technological workforce sees Myanmar as a clean place, where scope of experiment and creativity is quite massive and its dimensions are also different from domestic market, in terms of growth.

The central bank’s new cloud system, especially word processing and spreadsheets on the internet, would bring efficiency and strength to the institution. Owners of the bank will be responsible to fetch cloud to Myanmar. The current unit of the company contains 150 terminals. This arrangement is also capable of dealing with power outages in the country.