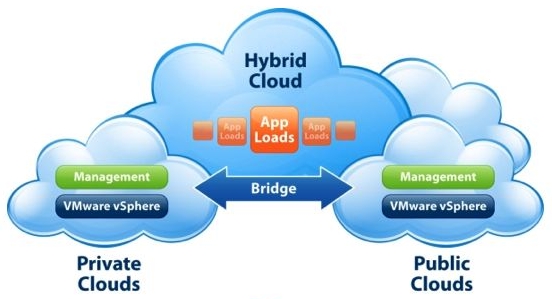 There are basically three types or models of cloud, known by the names of Public, Private and Hybrid. The three models are differentiated on the basis of where the ultimate authority of computing operations lies. Below are the main features of each of the three cloud models and their respective differences.

Customers utilize cloud services regardless of where their data is actually kept, i.e. on which server. An example of public cloud is e-mail service. Public cloud is ideal for small and medium-sized companies because it is cost-effective as compared to other alternatives, which cost quite a lot. The low cost is due to the shared resources among multiple users, who utilize the public cloud services.

Public cloud may sound very appealing, but it is not always the perfect choice for businesses. When a company wishes to have a complete control over their IT network and environment, private cloud is the best available option in such circumstances. In private cloud, the IT setup is completely owned and controlled by the company, and unlike in public cloud, it is not shared with other companies. Private cloud consists of on-premise private clouds and externally hosted private clouds. In the former, the entire IT infrastructure is controlled and housed within the company’s premises, while the latter entails external, third-party cloud experts who manage the cloud operations for a single company outside its premises. Private cloud is better than public cloud in terms of security because other organizations do not share the resources, and it is mostly adopted by companies having comprehensive IT infrastructure that is part of their primary operations. However, this feature of privacy and safety also makes private cloud costlier than public cloud. Still, externally hosted private cloud is less expensive than on-premise private cloud.

Hybrid cloud, as the name suggests, combines the features of both types of cloud systems described above. Hybrid cloud is preferred by companies that seek to capitalize on the benefits of both the clouds. Usually, in case of Hybrid cloud, companies store their vulnerable and important data on the private cloud, and less risky applications on the public cloud platform.

Computing cloud has almost the same features as that of public cloud, however, the services and resources are shared between companies that fall within the same domain. For example, all companies that are concerned with providing medical and health data of citizens, or belong to aviation industry, would share the cloud infrastructure and resources amongst themselves, if they use community cloud.