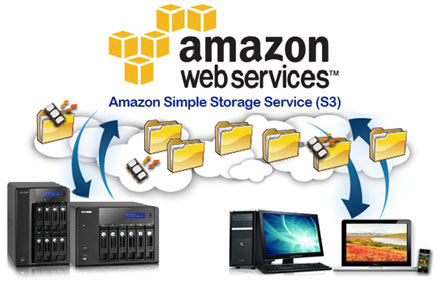 Amazon Web Services (AWS) are growing quicker and getting better day by day. After reaching one-trillion objects mark in less than a year, now Amazon is stocking over two trillion objects in its Simple Storage Service (S3) cloud storage.

Although Amazon has not revealed the allocation size of its stored objects yet proclaims the object’s range from zero to 5TB in size. These objects hold a key, a Version ID, a value, metadata, sub resources, and information about the access control.

It was on Thursday, when Amazon while announcing about the achieved milestone, wrote in a blog post that it took Amazon six long years to reach one trillion stored objects in its S3 in June 2012 and just a year to grow double in number. As per Amazon, currently S3 service is covering greater than 2 trillion objects.

While explaining the achieved landmark Amazon said, the universe of ours is just 13.6 billion years, if after the Big Bang we add one S3 object to every 60 hours then by now they will sum up to two million approximately. Also, if each object is worth $1 supposedly, then AWS S3 will exemplify the total worth of 30 Bill Gates or 133 Steve Ballmers.

The proposed statistics by the company do not depict the real size of Amazon’s cloud as it has not included Amazon’s Elastic Block Storage – a cloud service employed by huge percentage of EC2 instances. Amazon has also not revealed the actual figures of data stored in its yet another flash supported service DynamoDB NoSQL that offers a considerable slice of business to Amazon and the one which was described as rapidly evolving service in history of AWS by Amazon chief Andy Jassy late last year.

With so many services on Amazon cloud, the stated figures are tricky in comparing S3 services with other cloud storage services, as neither the operators like Joyent and Rackspace nor contemporary Google give out the real storage figures. 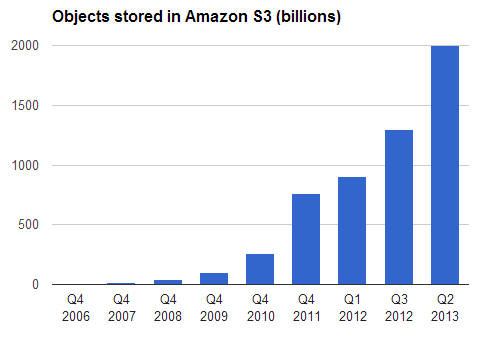 Seeing the stated figures, the enormous two trillion objects only for Amazon’s S3 with no detailed information about other cloud services, DynamoDB or EBS, it is evident that Amazon Web Services are growing leaps and bound and hold a great share in the cloud. It seems in company’s annual report, Jeff Bezos was justified in spending time discussing about AWS with an anticipated $2 billion in revenue, housing considerable amount of data for different emerging web services, AWS appears winning in so many fronts and remained around for long.