Dell moves a step further with its cloud accessibility, introducing an innovating portable device that would connect with any HDMI or MHL enabled displays. Being first of its kind, the device can turn a compatible display monitor into an HD visual of your data on cloud.

A year back, Dell Wyse Cloud Connect was initially displayed under the title Project Ophelia, at 2013 Consumer Electronics’ Show. However, the purpose and functionality was not much clear at the time of first appearance. This dongle shaped portable device is powered with Android OS to interface between virtual environment and user. The press release describes it as ultra-mobile cloud-access device.

The gadget is designed and developed for the individuals, either mobile or remote. Such individuals can have an easy, quick, and secure access to the content, applications, virtual desktops, and IT support on cloud environment. Besides of being small in size, Dell Wyse is equipped with enough capacities including 8 GB of internal storage, 1 GB RAM, and Android OS version 4.1.2. These features list this portable media among the smallest computing machines of the world. 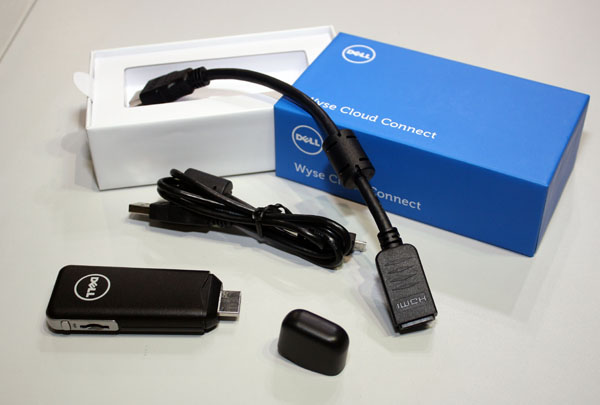 Having its own operating system does not mean that it would not be supported by conventional desktop operating systems. The device is as useful in Windows OS and Apple Mac OS as just on a display monitor. Its plug n play ability does not require installing the device and runs a full HD directly from the cloud. The petite size of the mechanism does not entail a battery or cord and acquires the required amount of charge when plugged into an HDMI port.

Another notable fact about the new invention is that even if it gets lost or stolen, users can claim for an alternative and similar device without having inconvenience. It fulfills all criteria for being secure and would never compromise over your precious information. The access points to the cloud applications and content are secured with a strong interface require authentication. Even if found by someone else, he/she would not be able to pass in and sniff around the confidential data.

Wyse is not only expedient for corporate affairs, but also for the educational purposes. This cost-effective virtual desktop can be used for data access in libraries, classrooms, and at homes. In addition to that, the device satisfies the recreational intentions of household users by providing access to online entertainment, games, apps, and other amusing content.

It is easy to navigate through the functionalities of device with its easy controls. Dell Wyse lets users connect keyboards and mice through Bluetooth®, or simply tap the screens, if allowed by the connected display device.

Agreeing to the latest predictions of IDC, the global Smart Connect Device (SCD) market will not drop its grown in 2014, while in 2017, the shipment might surpass 2.3 billion units. This will result in comprehensive revenue of $748.6 billion.

Priced as $129 per unit, the device is being shipped to different regions around the world. The overall package includes Dell Wyse Cloud Connect with complementary accessories including Bluetooth and keyboard.

Mobility is the key aspect technology is dealing with these days. Smart connect devices like the one above, would take the responsibility from smartphone connectivity, resulting in a more compact and efficient connectivity.