For Android developers, Google has come up with a new tool to ease their development tasks by providing a cloud based support, and offering an application framework for mobile app development. With this new tool, developers aren’t required to write backend codes for their apps as it is offering readymade code snippets, and even enables them to access Google’s cloud services.

The tool called Mobile Backend Starter was first announced by Google at its I/O developer conference last month, and was officially released earlier this week. The announcement is intended to help developers with their app development process, which seems to be a great incentive. Google is fully aware of difficulties developers face while writing codes and this is why has taken an initiative to provide them with a setup that will help them with their developments tasks. 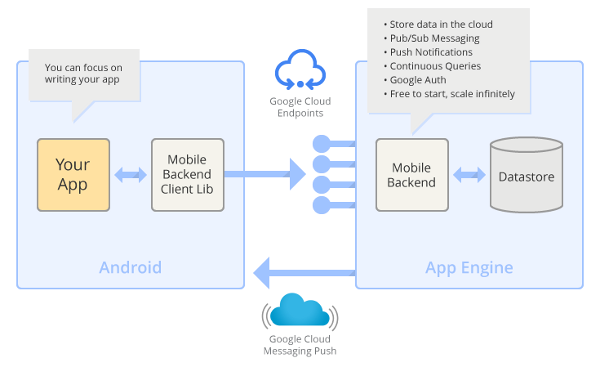 As per company officials, Google’s new release is a simple click deployable cloud services package that offers various services such as cloud based data storage, a client library and a default support for Google’s authentication and authorization. Using the package, developers can also avail services like access to Cloud Messaging, send messages from one device to other and continuous queries, which run on server and keep clients updated by automatically feeding new updates. The queries are supported by Prospective Search.

Discussing about the new product release, Google said that these days’ server infrastructures are commonly used by popular mobile apps for running their services, but developers aren’t comfortable in using them. However, Google’s new release will bring an end to their trouble as it offers every facility to them which they need in developing their app’s backend, without writing down codes for app’s backend.

As per company officials, the Mobile Backend Starter offers a “ready to deploy” all-purpose cloud backend, and client-side support for Android devices. Since the service operates on the top of App Engine so the backend can easily be scaled to any range as per your need, as it can support any load offered by the mobile app.

The Mobile Backend Starter can also be utilized in conjunction with Cloud Endpoints, a Google’s latest technology. With the combination of these two technologies, developers can not only automate development of backend for their mobile apps, but also avail client libraries for security and support of their apps.

For developers to get started with Google’s Mobile Backend Starter, they first need to select the Mobile Backend sample app for developing new App Engine project, and follow the instructions. Though deploying the backend seems like a “one-click process” as described by Google, a little effort is required from developer’s side to make everything run smoothly.

The launch of Mobile Backend Starter has given Google an edge over Amazon and  accomplish an equal standing with Microsoft’s Azure. Still, Google enjoys a natural lead over Windows Azure because of its Android capability.