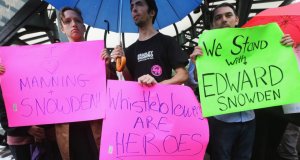 PRISM debacle has elicited long term and residual effect for US cloud providers. Companies are now less likely to put their trust in US based cloud service providers or CSPs as indicated in a survey from the cloud security alliance. The dire consequences US cloud service providers are likely to face are revocation of ongoing projects and reduction in new orders. According to statistics 56% companies declared that they don’t intend to employ the services of US cloud providers and one in 10 even went as far as to rescind ongoing projects with US CSPs because of PRISM incident.

Interestingly and astonishingly however, there were 3% who stated that the whole PRISM incident has reaffirmed their faith and trust in US vendors and they will continue their association with them. Mention worthy aspect of proceedings here is that the confidence of vendors hasn’t been jarred by this as 64% still deem that this incident hasn’t tarnished their chances of conducting business outside USA.

When quizzed about the overall and general security policy most of the respondents were very apprehensive and ill at ease about governmental transparency and legitimacy. Almost half of the respondents (47%) were of the opinion that their country’s procedure for obtaining information about criminals was “heavy handed” & “Poor”. They didn’t have any inkling about how often their information was accessed by the government. This also casts shadows over the transparency of the entire process. Again, surprisingly 10% expressed their satisfaction over their country’s data accessing and harvesting policy.

For those who are still flabbergasted and wondering what PRISM is and what the entire ruckus is about: PRIMS was kick started in 2007 and provides government, free and unrestricted access to the systems of major tech companies which includes names like Apple, Facebook, Google and Microsoft. The program allows government to access user specific information like emails and stored data. The common public would’ve never known about this severe breach of privacy but in June, a former US intelligence personnel named Edward Snowden blew the whistle on the whole operation. Subsequently, the US government came into action and filed criminal charges against Snowden who has been on the run ever since escaping to Hong Kong and then to Russia hoping to seek asylum. He has been stuck in transit zone of Moscow’s Sheremetyevo airport for the past month as the fate of his asylum appeal hangs in oblivion.

Snowden’s revelation has acted as a catalyst which rapidly diminished confidence in US cloud providers. 41% of the people surveyed, declared the “Patriot Act” should be abolished and retracted entirely. There were 45% people who took the moderate approach and said, it should be regulated more comprehensively and transparently, while 13% saw no need for any amendment or alteration in the controversial act. The latter faction declared the act fine as it is. PRISM effect is now a valid term used to denote the lack of trust the whole scenario has given birth to. This may put severe hindrances in adoption of cloud computing as people would be very reluctant to put their confidential data on cloud as they fear it would be monitored and accessed without their consent or knowledge.