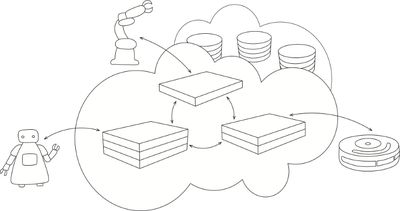 The future world is still unknown to us but like depicted in many Hollywood movies, there is a possibility that a time will come when we humans share the space with robots. In that case, robots and humans can either be the greatest foes or the supreme allies of each other. Seeing the possibilities of the future, the European RoboEarth Project has initiated Rapyuta, a wireless network service framework planned for robots.

The project Rapyuta named after Hayao Miyazaki’s animated feature film ‘Castle in the Sky’ (1986), is designed to guide robots learning about new fields and situations they have never experienced before by searching related information, i.e. various language dialects used in the world. This stops the robots from making their own eccentric imagery of the world, and in turn stops their distinctive dreaming, however, enhances their work efficiency.

The project operates like a virtual alive brain for remote robotic platforms, executing intricate computational tasks for them like folding a shirt. A protected interlinked computing environment with high bandwidth connection to RoboEarth will be provided to robots connected to Rapyuta, enabling them to transfer heavy calculations to the RoboEarth Cloud.

The project owners believe the proposed advancements will effectively trim off the associated costs of robots as well as enhance their performance. According to the project’s technical head, Mohanarajah Gajamohan, the planned Rapyuta will be effective for other technology projects too, such as, autonomous cars, unnamed aerial vehicles, and platforms that require heavy processing or involve working in complex environments.

The RoboEarth is a joint venture operated by five European nations. According to RoboEarth, they will not confine to Rapyuta only, and it is just the beginning. RoboEarth is working hard to increase the robots operability in the daily lives of humans and foresees a world of robots living along with humans. It is working on a network that will be used entirely by robots.